Data from NOAA's premiere surface reference network. The contiguous U.S. network of 114 stations was completed in 2008. There are two USCRN stations in Hawaii and deployment of a network of 29 stations in Alaska continues. The vision of the USCRN program is to maintain a sustainable high-quality climate observation network that 50 years from now can with the highest degree of confidence answer the question: How has the climate of the Nation changed over the past 50 years ? 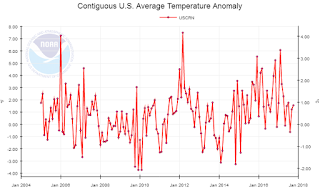 These stations were designed with climate science in mind. Three independent measurements of temperature and precipitation are made at each station, insuring continuity of record and maintenance of well-calibrated and highly accurate observations. The stations are placed in pristine environments expected to be free of development for many decades. Stations are monitored and maintained to high standards and are calibrated on an annual basis. In addition to temperature and precipitation, these stations also measure solar radiation, surface skin temperature, and surface winds. They also include triplicate measurements of soil moisture and soil temperature at five depths, as well as atmospheric relative humidity for most of the 114 contiguous U.S. stations. Stations in Alaska and Hawaii provide network experience and observations in polar and tropical regions.

National USHCN monthly temperature updates have been discontinued. USHCN data for January 1895 to August 2014 will remain available for historical comparison.