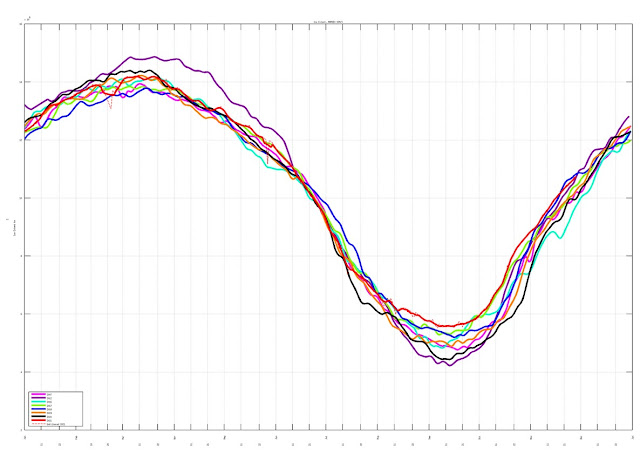 An Arctic Regional Ocean Observing System (Arctic ROOS) was established in December 2007 established by a group of 14 member institutions from nine European countries working actively with ocean observation and modelling systems for the Arctic Ocean and adjacent seas.

One of the goals of Arctic ROOS is to contribute to the legacy of IPY, maintaining cost-effective and useful observing systems after the end of IPY.  International Polar Year, a year of international research focused on the polar regions.

Arctic ROOS intends to include more members from countries outside of Europe and become a GOOS Regional Alliance for the Arctic. Arctic ROOS has established a secretariat at the Nansen Environmental and Remote Sensing Center in Norway.

Arctic ROOS is a contribution to the IPY project no. 379:  "IPY Operational Oceanography for the Arctic Ocean and adjacent seas" coordinated by Prof. Ola M. Johannessen. The project was submitted in 2005 and endorsed by IPY in 2006.

Climate model  -  A qualitative or quantitative representation of the climate system based on the physical, chemical and biological properties of its components, their interactions and feedback processes and accounting for some of its known properties. The climate system can be represented by models of varying complexity; that is, for any one component or combination of components a spectrum or hierarchy of models can be identified, differing in such aspects as the number of spatial dimensions, the extent to which physical, chemical or biological processes are explicitly represented, or the level at which empirical parametrisations are involved. There is an evolution towards more complex models with interactive chemistry and biology. Climate models are applied as a research tool to study and simulate the climate and for operational purposes, including monthly, seasonal and interannual climate predictions. See also Chemistry-climate model, Earth system model (ESM), Earth system model of intermediate complexity (EMIC), Energy balance model (EBM), Simple climate model (SCM), Regional climate model (RCM), Dynamic global vegetation model (DGVM), General circulation model (GCM) and Emulators. 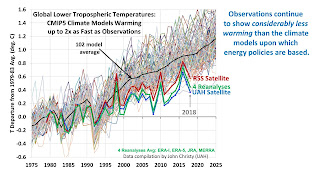 Since we don’t know future atmospheric CO2, volcanic eruptions, and whatever “ other climate drivers ” should be put into the IPCC models,  why are we using these models to set policy ?

2021: The Sixth Assessment Report (AR6) of the IPCC.
Chapter 1 Framing, Context, and Methods

1.5.4 Modelling Techniques, Comparisons and Performance Assessments
Numerical models, however complex, cannot be a perfect representation of the real world. Results from climate modelling simulations constitute a key line of evidence for the present Report, which requires considering the limitations of each model simulation.  Changes to a model that enhance its fitness for one purpose can sometimes decrease its fitness for others, by upsetting a pre-existing balance of approximations

1.5.3.2 Model Tuning and Adjustment
Whether tuning should be performed to facilitate accurate simulation of long-term trends such as changes in global mean temperature over the historical era, or rather be performed for each process independently such that all collective behaviour is emergent, is an open question ( Schmidt et al., 2017; Burrows et al., 2018 ).

1.5.4.2 Ensemble Modelling Techniques
Such ensembles employ a single GCM or ESM in a fixed configuration, but starting from a variety of different initial states. In some experiments, these initial states only differ slightly. As the climate system is chaotic, such tiny changes in initial conditions lead to different evolutions for the individual realizations of the system as a whole.
Overall, we assess that increases in computing power and the broader availability of larger and more varied ensembles of model simulations have contributed to better estimations of uncertainty in projections of future change ( high confidence ) . Note, however, that despite their widespread use in climate science today, the cost of the ensemble approach in human and computational resources, and the challenges associated with the interpretation of multi-model ensembles, has been questioned ( Palmer and Stevens, 2019; Touzé-Peiffer et al., 2020 ).
The AR5 quantified uncertainty in CMIP5 climate projections by selecting one realization per model per scenario, and calculating the 5 – 95 % range of the resulting ensemble and the same strategy is generally still used in AR6.  Broadly, the following chapters take the CMIP6  5 – 95 %  ensemble range as the likely uncertainty range for projections, with no further weighting or consideration of model ancestry and as long as no universal, robust method for weighting a multi-model projection ensemble is available.
1.6.3 Cumulative Carbon Dioxide Emissions
More fundamentally, while a global warming level is a good proxy for the state of the climate, it does not uniquely define a change in global or regional climate state.

Are Climate Models Getting Better, and How Would We Know ?
Climate models of today are, in principle, better than their predecessors. However, every bit of added complexity, while intended to improve some aspect of simulated climate, also introduces new sources of possible error ( e.g., via uncertain parameters ) and new interactions between model components that may, if only temporarily, degrade a model’s simulation of other aspects of the climate system. Furthermore, despite the progress that has been made, scientific uncertainty regarding the details of many processes remains.

Nevertheless, models still show significant errors. Although these  are  generally  greater  at  smaller  scales,  important  large-scale  problems  also  remain.  For  example,  deficiencies  remain  in  the  simulation  of  tropical  precipitation,  the  El  Niño-Southern  Oscillation  and  the  Madden-Julian  Oscillation  (an  observed  variation  in  tropical  winds  and  rainfall  with  a  time  scale  of  30  to  90  days).  The  ultimate  source  of  most  such  errors is that many important small-scale processes cannot be represented  explicitly  in  models,  and  so  must  be  included  in  approximate  form  as  they  interact  with  larger-scale  features.  This is partly due to limitations in computing power, but also results  from  limitations  in  scientific  understanding  or  in  the  availability of detailed observations of some physical processes. Significant uncertainties, in particular, are associated with the representation of clouds, and in the resulting cloud responses to climate change. Consequently, models continue to display a substantial range of global temperature change in response to specified greenhouse gas forcing  (see Chapter 10). Despite such uncertainties, however, models are unanimous in their prediction of substantial climate warming under greenhouse gas increases,  and  this  warming  is  of  a  magnitude  consistent  with  independent estimates derived from other sources, such as from observed climate changes and past climate reconstructions.

In sum, a strategy must recognize what is possible. In climate research and modelling, we should recognize that we are dealing with a coupled non-linear chaotic system, and therefore that the long-term prediction of future climate states is not possible. The most we can expect to achieve is the prediction of the probability distribution of the system’s future possible states by the generation  of  ensembles  of  model  solutions.

In particular, to reduce uncertainties further work is needed on the following priority topics:
Representation of climate processes in models, especially feedbacks associated  with  clouds,  oceans,  sea  ice  and  vegetation,  in  order  to improve projections of rates and regional patterns of climate change.

Although  scientists  are  reluctant  to give a single best estimate in this range,  it is necessary  for  the  presentation  of climate predictions  for  a choice of best estimate to  be  made. Taking into account  the model  results,  together with  observational  evidence  over  the  last  century  which is suggestive  of  the  climate  sensitivity being  in the  lower half of  the  range,   (see   section: " Has  man  already  begun  to change global climate ? ")  a value of climate sensitivity of 2.5°C  has  been  chosen  as  the  best  estimate ( for a doubling of CO2 ).
In   this  Assessment,   we  have  also  used  much  simpler  models,  which  simulate  the  behaviour  of  GCMs,   to  make  predictions  of  the  evolution  with  time  of global temperature  from  a  number  of emission  scenarios.   These  so-called  box-diffusion  models  contain  highly simplified  physics  but  give similar results  to GCMs  when  globally averaged.